Big wave of mergers are over.

Pay less for your transport
This as any merger within the top seven carriers in the world would find it extremely difficult to pass regulatory approval. While there could still be smaller regional acquisitions, there aren’t many other takeover candidates left for the larger container shipping companies.

According to Drewry media liaison, Antonia Mitsana, by 2021 the top seven carriers will control around three quarters of the world’s containership fleet whereas in 2005 the same group of carriers held a share of around 37%.

She added that the carrier consolidation that had already taken place – combined with brighter market prospects in the industry and the moratorium on new ships – would offer these carriers the opportunity to become financially stronger. However, this will also reduce the options available to shippers and raise freight rates in the future. 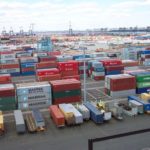