SA’s recession is over

SA’s recession is over

South Africa exited recession after gross domestic product (GDP) grew 2,5% in the second quarter, but the economy is expected to remain tight this year.
GDP data released on Tuesday is an improvement from the contraction for the two previous quarters. GDP declined 0,3% in the fourth quarter of 2016 and 0,7% in the first quarter.

Statistician-general Pali Lehohla described growth in agriculture as “shooting through the roof” by 33,6%.

Among the other growth sectors, mining grew 3,9%, boosted by higher commodity prices.

The secondary sector grew 1,9%, manufacturing rose 1,5% and electricity production was up 8,8%.

Household consumption bounced back, advancing 4,7% quarter-on-quarter (q/q), the fastest growth since the second quarter of 2012, as consumers spent more on clothing and footwear (26,7% q/q) and on food and alcoholic beverages (10,1% q/q).

The rise in consumer spending was also reflected recently in retail and vehicle sales statistics.

But FNB senior economist Mamello Matikinca said they were hesitant to read too much into the GDP figure and the recovery might be short-lived given the weak consumer confidence and slow growth in after-inflation wages.

“While further policy easing may provide a mild boost to GDP, structural difficulties will likely prevent any meaningful lift in economic growth. We continue to believe that growth will remain below one percent this year,” Matikinca said.

Standard Chartered Bank’s chief Africa economist, Razia Khan, said the GDP shows some momentum in the economy, but it is unlikely to be enough to discourage the central bank from further easing in support of the economic recovery.

“A restoration of investor confidence remains important for a sustained recovery. For now, that is still elusive,” she said.

Citadel chief economist Maarten Ackerman said: “The recession is over — but only ‘technically’. The reality is South Africa has experienced an ‘economic drought’ since about 2011. Over the past few years our economic growth has lagged that of the global economy by more than two percent.”

The rand remained stable under R13 to the U.S. dollar following the announcement of the GDP data.

Peregrine Treasury Solutions said the rand’s subdued response was due to the positive outcome already been priced in, and due to the “massive event risk in local politics”, with, for instance, the DA looking to pass a motion for an early election. 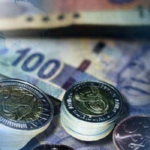