Ina Clearing and Forwarding Agent September 23, 2017
Norwegian shipping line Hoegh Autoliners only received official documentation from the Competition Commission on allegations of price fixing days after a press release was issued in South Africa.
Speaking to FTW Online from the liner’s headquarters in Oslo, Norway, Steinar Nyrud, general counsel in Hoegh’s legal department, said the company’s last dealings with the Competition Commission were in 2015.

“The press release earlier this week did come as a bit of a surprise,” he said referring to the allegations made in the statement that the liner and its Japanese rival Mitsui O.S.K Lines had colluded to fix transport tariffs to and from South Africa.

“We have only just received the official documentation from the Commission where they allege several wrongdoings on our part. We are currently looking into the matter.”

He said the company had as yet not been able to assess the allegations in detail and were in the process of going through it thoroughly. “We will respond in due course on this matter,” he told FTWO.

Earlier in the day several news agencies reported the liner had denied the accusations.

“We are now for the first time seeing these allegations against us and we have to process it in detail and will then take a position,” said Nyrud.

He said Hoegh had first been contacted by the Competition Commission in 2013. “We immediately gave our full cooperation to the Commission and worked with them. The last contact was in 2015 and, since then, we have not heard anything from them until this week’s press release. We now have the official documentation.”

The Competion Commission has referred Hoegh to the Tribunal for prosecution on seven charges relating to collusive tendering, price fixing and market division.

The charges stem from a probe into widespread anti-competitive conduct as far back as 1997 in the market for the provision of transportation of motor vehicles, equipment and machinery by sea to and from South Africa.

MOL previously approached the Commission in terms of its Corporate Leniency Policy and was subsequently granted leniency for its involvement in the cartel conduct in exchange for information and full cooperation in the matter.

In referring the matter against Hoegh to the Tribunal for adjudication, the Commission is seeking an order declaring that the company is liable for the payment of an administrative penalty equal to 10% of its annual turnover on each of the charges.

Hoegh specialises in the transportation of cars and controls around 6 to 7% of the global fleet in this particular market segment. 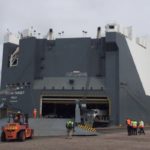